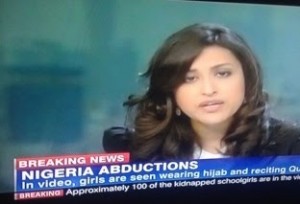 The head of the Boko Haram insurgents — Abubakar Shekau shocked the world this morning when he released another video that shows the girls in Muslim headdresses reciting Quran in a loud voice and declaring they have been converted into Islam.
Shekau also made it clear in the video that, he will be willing to exchange the schoolgirls for Boko Haram prisoners.
“Praise be to Allah, the lord of the world,” the girls whom a chunk of them are Christians chanted in the video. Will post the new video as soon as it gets online.