President Goodluck Jonathan on Saturday said the Boko Haram insurgent’s ultimate plan is to “destabilize the country, and take over Nigeria.” 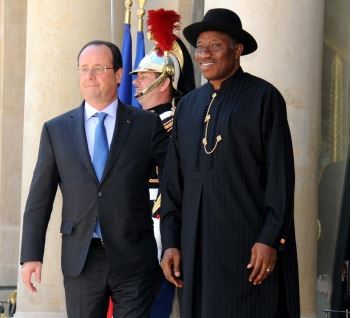 Jonathan said this at the “Regional Summit on Security in Nigeria,” held in France and attended by leaders of some of Nigeria’s neighbours including Benin, Chad, Niger Republic, and Cameroon; as well as the French President, Francois Hollande, U.S. Secretary of State, John Kerry, and other world leaders.

The Nigerian president told his audience that the Boko Haram is “hostile to democracy.” “it uses every means to indoctrinate its members; its ultimate objective is to destabilize the country, and take over Nigeria in order to turn it into a base of operation in West Africa and the entire continent,” Mr. Jonathan said.

The president also spoke on the abduction of over 250 girls from the Government Secondary School, Chibok, Borno State, on April 14; and the government’s efforts to free them.

“The major challenge that we have faced in our search and rescue operation so far has been the deluge of misinformation about the whereabouts of the girls and the circumstances of their disappearance,” Mr. Jonathan said.

“We have deployed about 20,000 troops to the area, intensified aerial surveillance, and strengthened local intelligence resources.

We shall spare no effort, we shall explore every avenue; we shall turn every stone, to ensure the return of the girls to their families and that the terrorists are defeated.”

Mr. Jonathan sought the assistance of the international community in defeating the Boko Haram, saying the group has caused the death of over 12,000 Nigerians since its insurgency began in 2009.

“This unconventional war has so far claimed over twelve thousand lives, with more than 8, 000 persons injured or maimed, not to mention the displacement of thousands of innocent Nigerians,” he said.