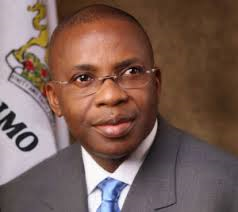 The Imo State chapter of the Peoples Democratic Party, PDP, has condemned the recent attack on the residence of the erstwhile Governor of the state, Ikedi Ohakim.

The party alleged that the incident was a failed assassination attempt on the life of the ex-governor by his political detractors.

The state PDP secretary, George Eguh, who made this known in a chat with journalists in Owerri on Thursday evening after the incident, lamented that the PDP has never attempted such an act against any member of the opposition throughout its 12 years as the ruling party in the state.

Eguh noted that the PDP has always respected the rule of law in any given situation.

Stressing that bombing was alien to the state, the PDP scribe called on relevant security agencies to quickly bring the perpetrators to book.

However, in a quick rebuttal, the ruling All Progressives Congress, APC, advised the PDP to look inward rather than point fingers elsewhere.

Also, the state Commissioner for Information and Strategy, Theodore Ekechi, condemned the act and sympathised with Ohakim.

He also urged the PDP members to look inward to unmask those behind the attack.