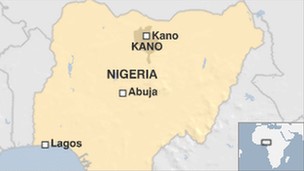 A blast has hit the northern Nigerian city of Kano, in a street with many bars and night spots, police say.

There is no word yet on casualties. Witnesses quoted by the AFP news agency that the explosion was caused by a suspected car bomb.

The explosion took place in an area mostly inhabited by Christians from southern Nigeria, the Reuters news agency reports.

The militant Islamist group Boko Haram has carried out attacks in Kano state.

Witnesses quoted by AFP said that the blast could be heard from several miles away and happened on a busy road lined with bars in the predominantly Christian area of Sabon Gari.