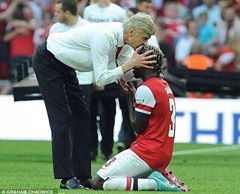 Worth £7.5 million a year, the contract had been offered to Wenger regardless of whether Arsenal won the FA Cup but the 64-year-old has now pledged to follow up his verbal agreement by putting pen to paper before he travels to the World Cup.

A formal announcement is likely this week, potentially Wednesday or Thursday. (Telegraph)