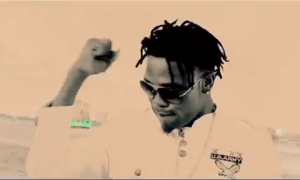 Nigerian indigenous singer — African China, has lashed out at some Nigerian artistes for being hypocrites about the ongoing crises of the abducted girls by the dreaded insurgents in the country.

According to him, the song ‘Boko Haram’ would have not just been African China alone, but a collaboration of various Nigerian artistes.

African China says he approached some of his fellow artistes for collaboration about the song which they accepted, but later turned him down during production.

“I was happy when I approached some of the artistes, but along the line, they turned it down saying that they couldn’t do the song and as such, i was left to do the song,”

He therefore wonders why those same colleagues of his would now turn around to copy what foreign celebrities have been doing with the #BringBackOurGirls campaign and then display it on social media.

‘I will never forgive the Nigerian artistes doing that because it is too late to give a voice now.’

When we would have sang to beg these people even before this bombing went rampant, they turned it down. Now, they are copying others, nonsense. Our celebrities only do things that trend