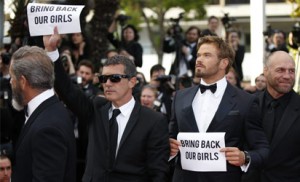 World recognized super Hollywood stars — rolled into Cannes on Sunday on top of two tanks, parading down the chic seaside promenade to promote their film “The Expendables 3″.

After a fun-filled morning of riding tanks and cracking jokes, the cast of “The Expendables 3″ took a far more serious tone on the red carpet when they brandished signs sporting #BringBackOurGirls.

Stallone, Schwarzenegger, Gibson, Banderas, Ford and others held up the signs to the cameras, joining global calls to free 223 schoolgirls kidnapped by Islamist militants in Nigeria last month.