Deolu
British Prime Minister, David Cameron, has been getting a lot of criticism for joining the #bringbackourgirls campaign. 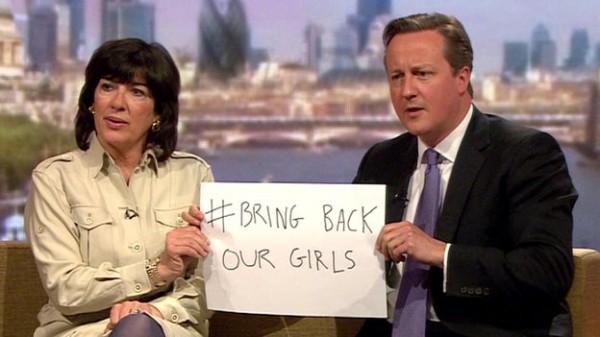 Christiane Amanpour and David Cameron
The angry activists calling Cameron out insist he should be doing something real about the 276 missing girls in Chibok if he really cares, and not joining in with the #hashtag routine that has been trending all over the world.

These criticism started coming in on twitter after the Prime Minister was seen on TV with CNN’s Christiane Amanpour, holding a #bringbackourgirls placard in protest of the missing school girls and later tweeting that he was “proud to support #BringBackOurGirls”. 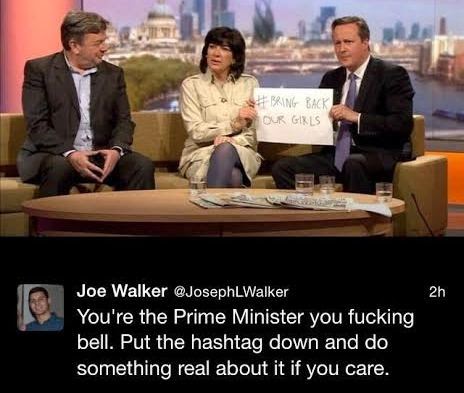 According to concerned activists, Cameron should be making obvious efforts in rescuing the kidnapped girls from the arms of the terrorist group, boko haram. He had also been called on earlier to send troops and security agents to Nigeria, with people online asking him if going on air to talk about it and holding a placard was really the best he can do?

One user, Jojo Moyes, said: “The #BringBackOurGirls hashtag is great. But it worries me that David Cameron thinks holding it up on TV is really the best he can do.”

Stig Abell said it was an example of “when the hashtag becomes the end itself”, while Stephanie Merritt wrote: “For the love of God, man, you could do a bit more than this.”

Cameron has however made it clear to the public while speaking on BBC’s Andrew Marr Show today, that Britain cannot just do whatever it chooses to do in a bid to help Nigeria, adding that it would however be possible that troops would be sent into the country if called upon in future.

He also added that he has agreed with the President of Nigeria, Goodluck Jonathan, that Britain would send a team of counter-terrorism experts to work with the bigger American team that would be going out to help recover the missing girls.