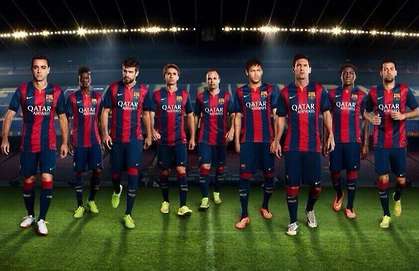 Barcelona midfielder Cesc Fabregas, a reported target of Manchester United and Arsenal, has been left out of the Catalan giants’ new kit promo – fuelling speculation that the Spain international is poised to leave the Camp Nou this summer.

The Express recall similarities to last year, when Thiago Alcantara was airbrushed out of a Barcelona kit advertisement following intense speculation Linking him to Manchester United and Bayern Munich.

The midfielder eventually joined Pep
Guardiola at the Allianz Arena.

The club’s big guns: Lionel Messi, Neymar, Andres Iniesta and even Xavi Hernandez – who has been linked with a move away from his beloved Barcelona
– are included in the new advert. But Fabregas, who rejoined his boyhood club in a £35m deal from Arsenal in 2011, is left out.

It was reported earlier this week that Barcelona have made Fabregas – and a host of other players – available for transfer after what has been, by their
impeccably high standards, a disappointing season.

The La Liga runners-up will, according to reports, accept bids worth €40m or higher. Fabregas was believed to be keen on a move to Old Trafford last summer, when Manchester United
submitted several bids to sign the World Cup winner, who spent eight years with the Gunners. A move failed to materialise, but the La Liga outfit are now prepared to negotiate with the Red Devils and other interested clubs.

Fabregas, meanwhile, would be content to stay at the Camp Nou – but only if newly-appointed head coach Luis Enrique regards him as an important part of his future plans. It’s believed Barcelona would be keen to sell the former Premier League star in order to generate funds to sign Juventus and
France midfielder Paul Pogba.{GMS}