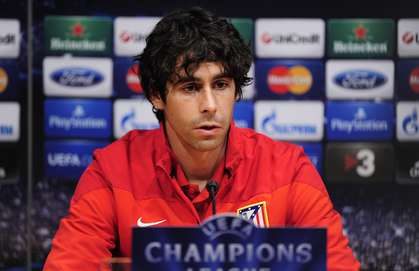 Chelsea are poised to re-sign the former Portugal international Tiago Mendes, whose contract with Atletico Madrid expires this summer, nine years after he left Stamford Bridge. The 33-year-old, who made 23 La Liga appearances for the recently-crowned Spanish champions this season, has accepted Jose Mourinho’s offer to return to the west London outfit, according to Spanish newspaper Marca. It’s reported that Tiago was convinced by Mourinho to return to Stamford Bridge following the sale of Brazil international David Luiz, who is on the verge of completing his £40m move to French champions Paris Saint-Germain. The versatile defender often played for Chelsea in a holding role, the position Tiago has excelled in throughout his career. The Portuguese only spent one season with Chelsea before leaving for Lyon in 2005. However, his 12 months with the Blues were certainly successful – in total he won three trophies: the Community Shield, the League Cup and the Premier League, scoring four goals in 34 league appearances. After spending two years with Lyon, Tiago moved on to Juventus, where he stayed for four years before joining Atletico Madrid. Diego Simeone was keen to keep the midfielder at the Vicente Calderon, but it seems the player has been convinced to re-unite with compatriot Mourinho in the English capital. Tiago is not part of the Portugal squad for this summer’s World Cup finals after deciding to hang up his boots following the 2010 World Cup in South Africa.{GMS}