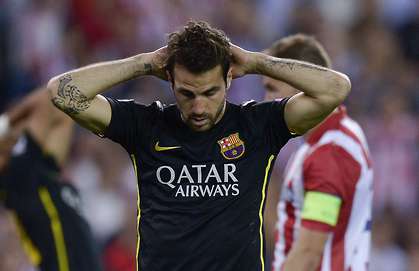 Chelsea boss Jose Mourinho is open to a the possibility of a potential swap deal involving David Luiz and Cesc Fabregas this summer.

As reported by The Sun, the Blues boss would be willing to depart with flamboyant Brazilian ace Luiz if he’s offered Fabregas in return.

Reports had previously suggested that Barcelona were ready to offer former Arsenal man Alex Song in exchange for Luiz, however Mourinho may now look
to hold out for Fabregas who earns around £100,000- a-week at the Nou Camp.

It remains to be seen as to whether Barcelona would be willing to do a straight swap deal involving the pair, but it’s clear that the Catalans do want to bring Luiz to the Nou Camp.

With Frank Lampard ageing at Chelsea – and having still not been offered a new deal with the club – Mourinho will be on the lookout for a replacement for the England international.

Fabregas enjoyed a fine stint at Arsenal before moving to the Nou Camp, so he’s a proven Premier League player. It certainly looks set to be a long
summer for Fabregas, with Chelsea being one of the dark horses to land him before the 2014/15 campaign.{GMS}