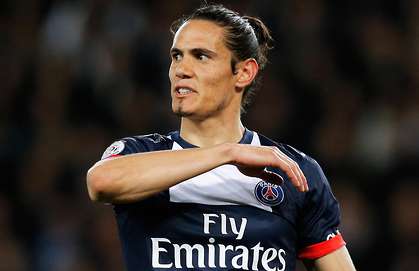 Paris Saint-Germain are willing to include striker Edinson Cavani in a potential swap deal to land Chelsea’s attacking winger Eden Hazard this summer – and the Blues are interested in signing the Uruguay international.

The Daily Star say reports in France have revealed this new information after it came to light that the French champions are prepared to pay almost £50m to secure the 23-year-old’s services.

Hazard, PSG believe, is tempted by a switch to the Parc des Princes after a difficult end to the season under Jose
Mourinho.

The Belgium international’s commitment was questioned by Mourinho following this month’s Champions League semi-final defeat to Atletico Madrid – a result which prompted Hazard to bemoan
his manager’s so-called negative tactics. And, despite Hazard recently admitting that Mourinho was right to criticise him, it’s believed the relationship between the two men has not completely recovered.

Chelsea owner Roman Abramovich will not sanction Hazard’s sale, while Mourinho also regards the winger an important part of his future plans.

Therefore, while Chelsea are interested in signing Cavani, they will not consider the possibility of using their star player as a makeweight in a part-exchange
deal for the prolific South American striker.

Chelsea have already stuck a £32m deal to bring Atletico Madrid striker Diego Costa to Stamford Bridge, while Bayern Munich forward Mario Mandzukic could also be on his way to west London if
Mourinho gets his way.

Meanwhile Cavani, who has scored 25 goals in 43 appearances for PSG this season and is valued at £50m, told reporters at the weekend that he intends to stay with the oil-rich Ligue 1 giants.{GMS}