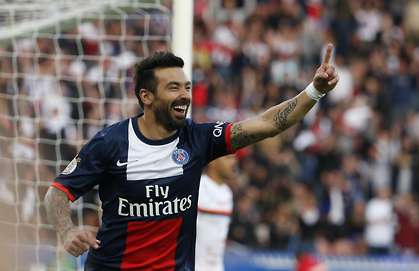 Chelsea manager Jose Mourinho wants
Ezequiel Lavezzi to partner Eden Hazard and Diego Costa in a formidable new strikeforce at Stamford Bridge next season and is willing to pay £16m to Paris Saint-Germain for the final piece of the puzzle, according to the Evening
Standard.

Lavezzi has emerged as a new Blues target following the stunning £48m deal that is set to take David Luiz to Paris Saint-Germain, a move which will be formalised during the early part of this week.

Luiz smashing the world record fee for a defender has freed up cash for Mourinho to spend on reinforcements this summer without worries of punishment under UEFA’s Financial Fair Play regulations,
and PSG is rather shockingly likely to be
his first port of call after wrapping up a £32m move for Atletico Madrid marksman Diego Costa.

Mourinho is acutely aware that a lack of firepower cost him team when it really mattered most this season and is prepared to spend big to make sure
that is not a concern next term, but not at the expense of letting Hazard leave West London.

The Blues are determined to keep Hazard and believe Lavezzi on the opposite flank would ensure there are
two fantastic foils for Costa next season, if their number one transfer target does decide to strut his stuff in the Premier League.

Chelsea chiefs ensured negotiations over Luiz with PSG included an enquiry for Lavezzi, who scored 12goals in all competitions this season.

PSG are yet to respond to that tentative early offer and are believed to value the Argentine international at around £16m, a sizeable sum for a player approaching 30.

Lavezzi will concentrate on this summer’s World Cup before making a decision over his future, but expect
PSG and Chelsea to be closely linked for reasons beyond Luiz by the time another summer season of transfer chaos has concluded.{GMS}