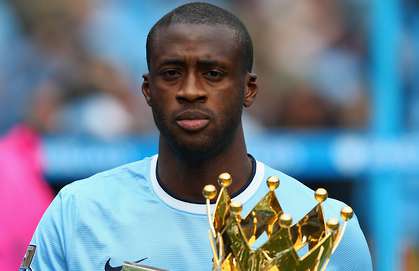 Chelsea, Arsenal and Liverpool are all waiting to see whether Yaya Toure resolves his differences with Manchester City before making a move for the unhappy Ivory Coast international, who reportedly wants to quit the Etihad Stadium.

Toure’s agent, Dimitry Seluk, has confirmed there is a “big possibility” his client will leave the recently- crowned Premier League champions after four years at the club because he feels under appreciated and disrespected.

He told The Sun: “There’s a big possibility Yaya will Leave this summer. Yaya is very upset.

“It’s not possible to buy relationships with money. And if they cannot shake the hand of Yaya, bye bye, no problem.”

Seluk went on to reveal that Toure was left feeling downbeat after failing to receive any birthday wishes from the club – despite plenty of evidence to the
contrary.

“What happened at his birthday meant the club don’t care about him. It was proof,” Seluk insists. “If a player like Yaya went to Liverpool and they won the league after 24 years, I think Yaya can be a god in Liverpool.

The Daily Star suggest Chelsea would be one of the clubs with the financial clout to secure Toure’s services this summer. It’s believed the 31-year-old would be open to joining another Premier League
club – even if it means taking a pay cut on the £11m- a-year deal he currently earns with the Citizens.

Arsenal may also be able to finance a deal. Arsene Wenger is a big fan of the African, while the Gunners’ boss will have as much as £100m to spend on
reinforcements in the summer transfer window.

Liverpool could prove an attractive option for Toure because his brother, Kolo, plies his trade at Anfield; while a move back to Barcelona could be another potential option.

A transfer to City’s local rivals Manchester United, however, is out of the question.{GMS}