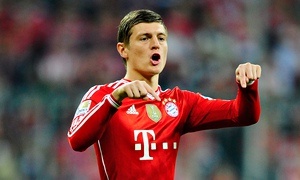 Toni Kroos could still end up in the Barclays Premier League after claims Chelsea are ready to join the bidding if he becomes a free agent next year.

A proposed move to Manchester United
may have collapsed, after new manager Louis Van Gaal decided against pursuing their interest, but the Bayern Munich midfielder remains at loggerheads with club bosses over renewing a contract that is entering its final 12 months.

Even an attempt to end conjecture he may be Old Trafford-bound left the door open for other clubs to start drawing up wage offers to try and tempt him away this time next year.

‘There has been a lot of speculation, but I won’t be going to Manchester United,’ he said. ‘I can tell you for sure I will be
playing for Bayern Munich next season.’

According to sources in Munich, his refusal to commit himself to Bayern beyond the one remaining season on his current contract has alerted Chelsea manager Jose Mourinho, who would welcome the chance to add the 24-year old’s goalscoring flair from midfield to his attacking options.

Kroos would be free to talk to Chelsea
representatives at the turn of the year, and there is little doubt they could meet wage demands that have so far scuppered any prospect of a new deal
being thrashed out at Bayern.{DailyMail}