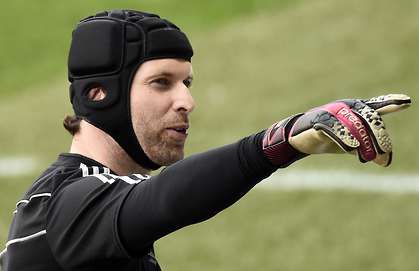 Chelsea goalkeeper Petr Cech is set to follow David Luiz to Paris Saint-Germain this summer as Jose Mourinho prepares to make Thibaut Courtois his number one at Stamford Bridge next season.

The Metro claim Mourinho will allow Cech to join the oil-rich French champions in order to pave the way for Belgium international Courtois to become the
Blues’ first-choice goalkeeper, even though the 32- year-old was voted as the Premier League’s best player in his position this season.

Cech has arguably been the best goalkeeper in the Premier League over the last decade since arriving at Stamford Bridge from Rennes in 2004.

And although he remains an extremely reliable goalkeeper in his own right, Mourinho knows Courtois is something
very special indeed.

The 22-year-old Belgian, who played an. Instrumental role in helping loan club Atletico Madrid win their first La Liga title since 1996 this season, is already one of the best goalkeepers in the world.

Some believe he is currently performing at a higher level than Bayern Munich and Germany ‘keeper Manuel Neuer, who has been widely regarded as the world’s
best over the last two seasons.

Courtois recently admitted it would be “unhealthy” if both he and Cech were at Chelsea next season battling it out for the number one jersey, but it seems Mourinho is prepared to ruffle a few feathers by selling the experienced Czech Republic International who has also been linked to both Arsenal and Tottenham.

PSG, who have already secured a £40m deal for Chelsea’s Brazil international Luiz, also want to sign the Blues’ star player Eden Hazard, who is reportedly
keen to join the Ligue 1 outfit this summer. The Parisians also have one eye on Chelsea playmaker Oscar.{GMS}