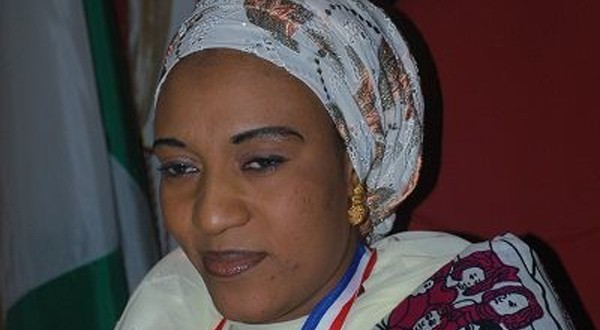 Borno governor’s wife, Hajiya Nana Shettima, said on Monday that her absence at Sunday’s meeting with the First Lady, Dame Patience Jonathan, over the abduction of schoolgirls in Chibok, was not to disrespect the office of the First Lady.

Mrs. Shettima’s explanation is contained in a statement signed by her spokesperson, Aisha Hassan, released to newsmen in Maiduguri, the Borno capital.

The statement said that the governor’s wife was represented at the meeting to enable her prepare for a long scheduled visit to Chibok on Monday, to meet with aggrieved parents of the abducted girls and give them moral support.

The statement noted that Mrs. Shettima had the highest regard for the first lady as the mother of the nation.

“Mrs Shettima had actually travelled to Abuja all the way from Maiduguri on 28th of April, and on the evening of that day, she met the First Lady at the Villa and took two hours to brief her on the schoolgirls abduction as well as her (Mrs Shettima) personal efforts and that of her husband, Governor Shettima towards the freedom of the girls.

”Some wives of service chiefs and National women leader of the PDP, Mrs Kema Chikwe, were present when the governor’s wife met with the First Lady.

”The First Lady appreciated the efforts of the Governor’s wife and was consoling her on noticing how depressed she was”, the statement said.

It said that before the April 28 meeting with the first lady, Mrs Shettima had held a meeting with coalition of women groups that included stakeholders of Chibok, officials of the National Council of Women Societies, wives of security chiefs in Borno State and the Christian Association of Nigeria.

The statement added that the meeting also had in attendance representatives of the Federation of Muslim Women of Nigeria (FOMWAN), Association of Christian Widows, Association of Muslim Widows, the National Association of Women Journalists (NAWOJ), selected female professionals that included university lecturers, political appointees and the Principal of the Government Girls Secondary School, Chibok.

It said that a copy of the communique issued at the end of the meeting was communicated to the first lady.

”The fact of the matter is that Hajiya Nana Shettima is right now in Chibok, she has met with parents of the abducted  schoolgirls to offer support to them.

”Some of the parents have been discovered to have health challenges that will be immediately addressed.

”Mrs Shettima left today (Monday) for Chibok after she was finally given a security clearance that was delayed since last week for operational reasons.

”The Governor’s wife has the highest respect for the First Lady, Dame Patience Jonathan, and couldn’t have done anything to disrespect her.

”The First Lady and her confidants can bear testimony to how respectful and obedient the governor’s wife has been to her in the last three years and how she promptly attends to all events related to the First Lady however inconvenient.

”The Governor’s wife regards the First Lady as a mother given her age and position as mother of the nation”, the statement said.

Information Nigeria had earlier reported that Mrs. Jonathan accused the Borno governor’s wife of being less concerned about the fate of the missing girls, saying “we cannot cry more than the bereaved”.