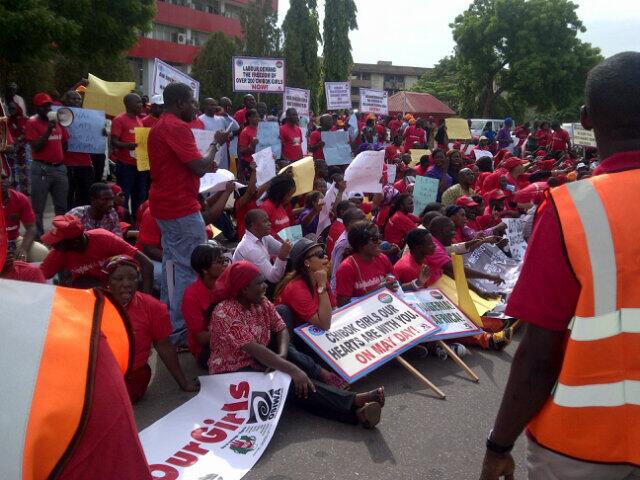 Children of military personnel are among the over 200 female students abducted by Boko Haram from the Government Girls Secondary School, Chibok, in Borno State, the defence headquarters have said.

The Director of Defence Information, Major General Chris Olukolade stated that some staff of the defence headquarters were also facing the trauma of not being able to unite with their daughters for the past two weeks due to the girls’ abduction.

He made this known when he addressed a gathering of protesting women led by a former minister, Oby Ezekwesili at the defence headquarters, as they demanded for the rescue of the abducted students.

Olukolade, while reacting to the demands of the protesters, said, “Everything you said is quite understood. The chief of defence staff has said we should come and usher in your representatives and we will do that.

“But if I must say one word before we go in, I will say that everything you said here is important to us. Your concerns are our concerns, these children are our children as well”.

Pointing in the direction of the defence headquarters, Olukolade said, “In this building you have here, there are people who have children among those people (kidnapped girls). So we share your concern and be sure that we are not leaving Nigerians alone in this.

“This meeting will enable us to explain to you the efforts that are ongoing at the level of the military and the government. Be sure that every effort is ongoing to bring back our daughters alive.

“The Nigerian Armed Forces is interested in discussing with you and we will discuss with your representatives and they will bring you feedback. We will listen to you and your protest is understood”.

The Head, Chibok Community in Abuja, Mr. Hosiah Sambido, who could not hold back the tears as he pleaded for help from the military for the release of the girls, said the development had instilled fear among female students in the area.

He said some parents had become so distraught by the abduction of their daughters that they have refused to eat food.

Sambido said, “Since April 14 we have entered this trauma which is no more news in the whole world that insurgents came and set part of our village ablaze and cart away 276 girls. Though 53 of the girls escaped on their own effort but up till now we don’t know where the rest of the girls are and the situation they face.

“Their parents cannot do anything. Some have refused to eat. Some of the men mobilised themselves and went to the forest twice but they came back because the kidnappers are too strong.

“But up till this time, there is nothing like any rescue process. We are begging the Federal Government and the army to intervene in this matter. Our community is relatively small and if generation of the same age is out, in the future where are we going to get the leaders? Can our girls go to school now? Please help us”, Sambido pleaded.

Ezekwesili on her part, said Nigerians had not seen any urgency by the military in rescuing the girls.

She said, “Though we’ve heard that some rescue measures are going, we want to state that whatever may be going on is not persuasive and that is why we came out”.

The former World Bank Vice President for Africa lamented that in the age of google maps and aerial surveillance, how was it possible that the rescue of over 200 girls in a place of define territory was yet to be achieved?