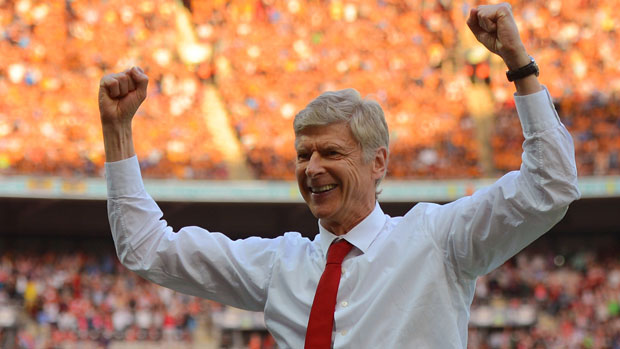 Arsenal have confirmed that Arsene Wenger has finally put pen-to-paper on a new contract that will keep him at the club for another three years.

The extension, which is believed to have been agreed as far back as the autumn and is worth approximately £24 million in total, means the 64- year-old could be at the helm until summer 2017 – a ridiculously impressive 21 year shift in North London.

Speaking about his decision to stay on at the Emirates the boss underlined that his commitment to the club was never in doubt. “I want to stay and to continue to develop the team and the club. We are entering a very exciting period.

We have a strong squad, financial stability and huge support around the world. We are all determined to bring more success to this club.

“The club has always shown faith in me and I’m very grateful for that. We have gone through fantastic periods and also periods where we have had to stick
together. Every time when that togetherness was tested I got the right response. I think I have shown some loyalty as well towards this club and hopefully we can make some more history. I am sure we can.”

Stan Kroenke, no doubt pleased he’s not going to spend his summer ‘doing a Levy’, praised the Frenchman for his achievements while also looking to
a bright future.

“Sustained excellence is the hardest thing to achieve in sport and the fact Arsenal has competed at the top of the game in England and Europe throughout the time Arsène has been manager, is the ultimate testimony to his consistency of performance, talent and ambition.

“We are delighted with the FA Cup success which has added to his already outstanding record. Under his guidance we look forward to adding more trophies in future seasons.”

As has been well-documented Wenger has led the Gunners to seven major trophies since joining in 1996, an achievement that surpasses those of his
predecessors in the role. He’s also, in case you weren’t listening at the back, secured 17 consecutive years of Champions League football.{Arseblognews}

The Super Eagles of Nigeria have been drawn in group c alongside Cape Verde, the Central African Republic and Liberia in the second round...
Read more

English champions, Manchester City got back to winning ways by defeating Sheffield United by a lone goal after their disappointing 2-2 draw against Crystal...
Read more
- Advertisement -