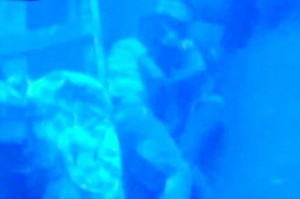 Locked in a tender embrace deep under the sea, this heartbreaking photo shows a couple who drowned when an African migrant ship sank off the coast of Italy.

More than 300 people were killed when the boat caught fire and sank near the island of Lampedusa last October.

It had been carrying up to 500 migrants from Somalia and Eritrea hoping to make a better life in Europe.

Rescue crews tried to recover as many bodies as possible, with dozens of coffins lined up in Lampedusa at the time , but police divers have been back in the wreck of the ship this week where a number of the victims still remain.

One couple were found with their arms still wrapped around one another in the hull on the ocean floor.

In the days after the disaster, divers also discovered the body of a baby who had been born as his mother drowned.

The premature boy, still attached to his umbilical cord, was found in the folds of the Eritrean’s clothes.

Diver Renato Sollustri said they had to fight through a wall of intertwined bodies to reach the mum and son, and added: “None of us could believe it.

“We all began to cry – my mask was full of tears.

“The baby may never have seen light – only the darkness at the bottom of the sea.

“It was a horrible task.”

The newest images were released as yet another migrant ship carrying 200 sank in the waters off Italy.

It is thought at least 17 people died, and many more are missing.