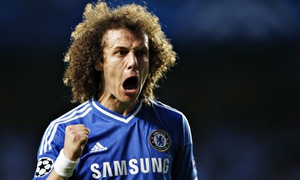 Chelsea are in advanced talks with Paris St Germain over the sale of David Luiz to the Ligue 1 champions with the fee for the Brazilian expected to top the £40m mark, a record for a defender. Discussions between the clubs are on-going and an agreement is anticipated well before the start of the World Cup.

David Luiz, a £23.5m signing from Benfica in January 2011, has claimed the Champions League and Europa League with Chelsea but found himself something of a stop-gap at both centre-half and in defensive midfield last season.

At 27, and with the likes of Barcelona and Bayern Munich also long- standing admirers, he represents a saleable asset for the London club as they seek to comply with Uefa’s financial fair play regulations.

The sale to PSG, who are more bullish about maintaining their lavish spending of recent years, would grant José Mourinho more leeway in the market this summer to strengthen his squad in other
areas.

The Spain forward Diego Costa is expected to join from Atlético Madrid for £31.8m, reflecting the buy-out clause in his current contract at Vicente Calderon, while there is interest in securing a second striker with Bayern’s Mario Mandzukic admired.

Chelsea are also seeking a left-back to replace the out-going Ashley Cole, with Sevilla’s Alberto Moreno and Filipe Luis at Atlético tracked.

Mourinho boasts cover at centre-half where John Terry has signed on for a further season, Gary Cahill has excelled, and Branislav Ivanovic can perform. The
youngsters Tomas Kalas – who played in the wins at Liverpool and Cardiff towards the end of last season – and Kurt Zouma, who was signed mid-season from St Etienne and remained at the French club for the rest of the campaign, will also seek first-team involvement, meaning David Luiz’s role would most likely have come in midfield. There, too, Chelsea
boast numbers with Nemanja Matic to be first-choice holding midfielder next term.

PSG are willing to match Chelsea’s valuation of the Brazilian, conscious as they are of Bayern and Barca’s interest in the player, with the president Nasser al- Khelaifi and the sporting director, Olivier Létang, intent upon securing the player. David Luiz could undertake his medical for the French club at Brazil’s
pre-World Cup training camp. Yet PSG’s on-going interest in Eden Hazard will be rebuffed by the Londoners. The former Lille forward has been a long- term target for the French club’s owners, Qatari Sports Investments, with the manager Laurent Blanc reaffirming his admiration for the Belgium international this week.

“You can talk about everything – from systems to individual or collective qualities – but if you have a player who is capable of taking three or four players
out of the game at any moment, that’s something else,” said Blanc. “You never know what to expect from players like that. They unnerve opponents. But I
can love a player all I want while knowing very well that I may not get him.”

Asked if there was an alternative target to Hazard if that pursuit is knocked back, he added: “Of course. There’s also a plan C. We’ll focus on the specific areas
of the team we want to strengthen and come up with three possible solutions, all while knowing that we want to go with Plan A.”{Guardian}