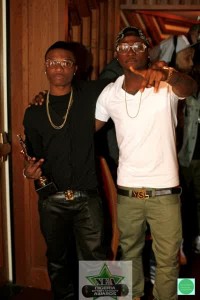 The Omo Baba Olowo of Naija music — Davido says he will do a song with Wizkid when God says so.

Nigerian singing sensations, Davido and Wizkid have always been ‘battling’ it out on our airwaves with their numerous songs..

The melodious singers’  fans have tried to fuel a rivalry/competition between the two at different times with some claiming one is better than the other.

When a fan asked Davido if  he would do a song with Wizkid, he said “When God says, shout out to Wiz.”