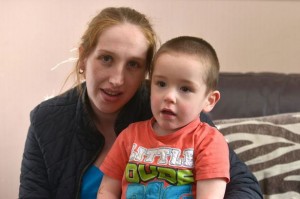 A deaf toddler celebrated his birthday in silence after thieves stole his hearing aid.

Dominic Harrington’s lifeline was snatched days before his third birthday during a raid on his family’s home.

It meant the tot was unable to hear his mum Samantha wish him ‘Happy birthday’ on his big day.

Mum-of-five Samantha said: “Everybody takes for granted saying things like night, night and I love you. But it’s his birthday and he won’t hear me say ‘Happy birthday’, he won’t understand.

“He can’t talk yet and he’s too young to learn sign language.”

The hearing aid was stolen during a burglary at the family’s home in Rochdale, Manchester.

Samantha and Dominic were upstairs with his siblings Libby, 10, Ryan, nine, Vikki, seven, and Alex, four when burglars sneaked into the house and snatched a laptop and the handbag containing the aid and birthday cash.

Dad Gavin, 33, was walking the family’s two dogs at the time.

Samantha, who is seven-and-a-half months pregnant, said: “I was upstairs and didn’t hear anything.

“They were watching and waiting for us to go out of the house, no-one in their right mind would come into the house with the dogs.

“If I’d have come down the stairs what would have happened? Would they have hit a pregnant woman? What use the hearing aid is to anyone is beyond me – it’s programmed for his ears alone.”

Police later recovered the handbag but the hearing aid and cash are still missing.