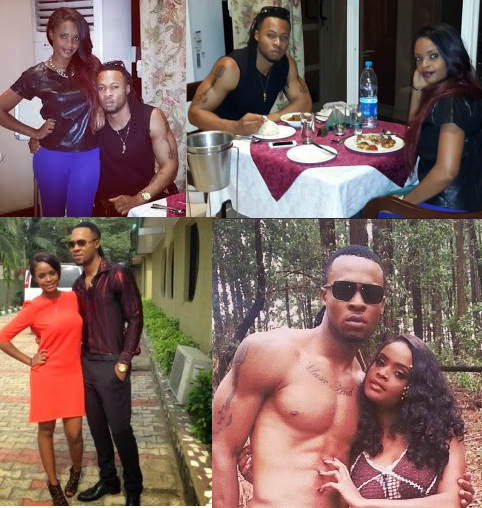 Flavour, what are you waiting for??? Sexy Dillish Mathews, the winner of Big Brother Africa “The Chase” and Namibian ex beauty queen was in Nigeria recently for the Mr. Nigeria contest.

In an interview with Ynaija, she opened up on her personal life, marriage, relationship with Flavour and more……

How did it feel to win Big Brother Africa?

I still find it unbelievable. I mean seeing all those people who came from so many different countries during the opening ceremony, I still ask myself how I made it. People used to say I was too reserved and didn’t kiss or have sex but I guess if it’s your time, it’s your time. I’m still humbled by the fact that I won.

What do you think helped you win the competition?

I don’t think there’s any strategy because I was just being myself. I think the trick is to be yourself, if you’re wild and crazy, stay that way, if you’re not, don’t pretend to be.

What was the first thing you bought with the prize money?

I haven’t really spent my money on myself because I’ve been investing in real estate. However, I did buy myself some watches including a Rolex.

You have your own cosmetics line now, do you have any other business ventures in mind?

My cosmetics line, Vault by Dillish is an endorsement by a US company and I also have my own salon in Namibia. I also have investments in real estate. Frankly, I consider myself to be businesswoman not an entertainer.

Do you have any interests in music or acting?

I love African music. After Big Brother, my mind opened and I started listening to South African music, to D’banj and of course to Flavour so when he asked me to feature in his video, I said yes.  As for acting, I’m working on a few things and if they turn out well, I just might explore it too.

So about Flavour, there’s a rumour on the grapevine that you’re a couple, is that true?

Flavour and I are just friends. I mean he’s hot and I’m sure he thinks I’m hot but we’re just okay with being friends. Besides, he hasn’t made any moves like that and I haven’t either.

So are you expecting him to make a move?

No, I’m not. He has a girlfriend and I hear she’s a hottie.

What do you think about Nigerian men?

I think there’s a possibility that I’d either marry a Nigerian or a Ghanaian, there’s just something about them that I find attractive.

You once said that you don’t believe in marriage, do you still feel this way, and why?

I still feel this way but it’s not that I don’t believe in it, I just don’t think I would want to get married. I think I would be okay if I could just find a guy that I could date forever. This might change when I get older but for now that’s how I feel.

Have you ever had your heart broken?

Of course, I’ve had my heart broken, I’ve been friend zoned many times and I’ve been turned down before too. I didn’t take it to heart though because I think it’s just normal.

Speaking about heartbreak, there were a lot of rumours about what led to the breakup between you and your ex-boyfriend, Stephen. What really happened?

All I have to say is that not everything reported is true so don’t believe everything you read. Sometimes people make stories up so that the media can leave them alone.

You promised your fans on Twitter that you intend to start having babies this year, so when are we expecting the little ones?

As soon as I find myself a hunk, I’ll start. I’ve always wanted to have kids before 25 and I’ll be 25 next year so I’m running out of time.

After you won Big Brother, your long lost father suddenly surfaced, how did that make you feel?

As a child without a father, you look around and just wish you could be like other kids who have one. It’s an empty feeling and you just want to know him and if you look like him.  I’ve always wanted to know and I went to Big Brother and mentioned his name in the hope of finding him. When he came forward, I rejected him at first and then I saw the resemblance and opened up and accepted him. I’m taking it slowly now and getting to know him.

What do you think is the biggest challenge facing women in Africa?

I think it’s the fact that people believe we should be submissive. If you start making a lot of money as an African woman, you could get demotivated because people believe you won’t find a husband. Men don’t really like women who are rich because they believe she’ll misbehave.

You’ve been helping a lot of children, do you have a charity organization of your own?

Yes I do, it’s called the Royal Hope Foundation and it focuses on community development and I hope that it can spread across Africa.

How do you intend to do your part in making the world a better place?

The vision I have, is that of helping people. It’s such a passion for me that I can sacrifice a lot just to make a person’s life better. I’m not interested in a lavish lifestyle, I just want to help people.