A Toyota driver, who is suspected to be driving under the influence (DUI), crashed into a tricycle (popularly known as Keke NAPEP) killing a pregnant woman and five others on Saturday night, May 3. 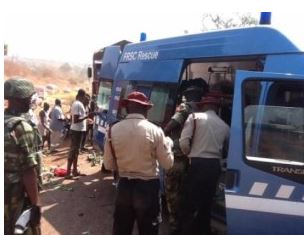 According to reports, the accident happened opposite a popular eatery at Opolo Suburb of Yenagoa local government, Bayelsa State at about 10pm on Saturday.

It was gathered that the driver, who took to his heels after the crash, drove a Toyota Avalon Car with Lagos registration number EKY 711 BV.

Reports stated that a pregnant woman, a Hausa man and a native of Ammassoma Community in Southern Ijaw area of the state, identified as Miss Akpotu Olorogun, died at the spot.

Two other victims of the crash, who were rushed to the Federal Medical Centre, Yenagoa by officers of the Divisional Traffic Control from Ekeki Police Station, were said to give up the ghost later in the hospital.

The Toyota car which was flung on its side has been searched for any documents that could help to identify the drunk driver.

The spokesman of the state Police Command, Mr.Alex Akhigbe, confirmed the accident and added that investigation is in progress.