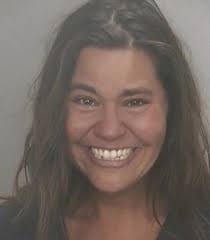 A Florida woman was arrested for disorderly intoxication on Tuesday after parents complained to cops that she was chasing their children along Pompano Beach.

Jennifer Hinkle, 36, was observed “chasing after small children and trying to touch and kiss them,” according to a police report obtained by NBC Miami.

Hinkle was nearly charged with battery, but parents didn’t want to press charges; they just wanted her to leave the beach.

The suspect was held on a $250 bond Wednesday, according to the New York Daily News.