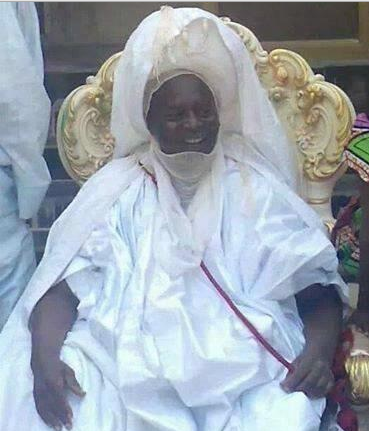 * Alhaji Shehu Abubakar on his throne

A large crowd has gathered at the emir’s palace struggling to see the remains of the emir. Security operatives did their best to control the crowd. No serious incidents were reported.

* People gathered to wait the arrival of monarch’s body to the Emir’s palace in Gombe. Photo credit – @aaramz

The funeral prayer was led by the Chief Imam of Gombe Central Mosque, Aminu Pindiga.

The event was gloomed by the death of the Emir of Gwoza, Alhaji Idrisa Timta, who lost his live in an attack by suspected Boko Haram members in the morning of Friday. The Emirs of Askira and Uba, who were also in the same convoy en route to Gombe, had survived.

The security was beefed-up because of the mentioned incident and because some of the top Nigerian politicians and stakeholders were in attendance.

The people of Gombe state prayed God to send another Emir that would continue with the good works of late Alhaji Shehu Abubakar.

The Emir passed away at the age of 76 on May 27, 2014 in a London hospital. Alhaji Shehu Abubakar was one of those who fought for creation of Gombe State and had contributed immensely to peace and harmony in the state.