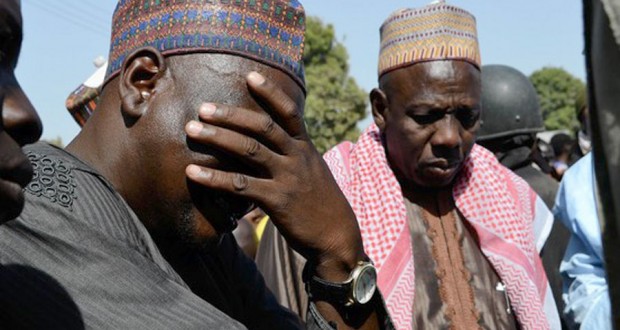 It was an emotional moment yesterday in Chibok, Borno State, where over 200 schoolgirls were abducted last month as the girls’ parents, schoolmates and members of the Presidential Fact-Finding Committee converged on the burnt school premises.

Most of the parents wept as they recounted the incident. The committee Chairman, Brig. Gen. Ibrahim Sabo, also reportedly betrayed his emotions as he listened to the parents’ accounts of the April 14 invasion of the Government Girls Secondary School, Chibok, by Boko Haram gunmen.

A statement by the panel’s spokesman, Mr. Kingsley Osadolor, said Gen. Sabo assured the parents that the girls would return home safely.

According to the statement, the presidential fact-finding panel was received by the State Commissioner for Education, Musa Kubo; Chairman of Chibok Local Government, Bana Lawan, five District Heads of the Chibok communities, Chairman of the Parents-Teachers Association, the principal, and others, including wailing parents of the abducted girls.

The statement said: “Also present were some of the students who escaped from the insurgents.

“Members of the Committee visited the burnt-out structures of the Government Secondary School, where the girls were abducted. The receiving party conducted members of the committee round the grounds of the school.

“The Principal, Vice Principals, matrons of the hostels, as well as security guards and cooks were earlier debriefed by the committee in Maiduguri.

“The committee later held an interactive session with the Chibok communities on the school premises.

“At the meeting, Gen. Sabo, who spoke with misty eyes, said the Committee came, first, to sympathise with the parents and other community members over the havoc of the insurgents.

“He assured the people of President Goodluck Jonathan’s concern about the fate of the abducted students, saying that the President was having sleepless nights”.

The statement said Sabo also urged the people to remain calm and patient.

He also informed them of the multifaceted approach government is using to resolve the abduction saga.

Gen. Sabo was quoted as saying:  “As we gather here today to see you wailing, by the grace of God, we will also gather here to dance and rejoice with you when the girls regain their freedom”.

The Chibok LG chairman lauded the committee for visiting and bringing messages of succor and hope to members of the communities.

He also faulted those who had claimed that the mass abduction was a political gimmick.

“The greatest fact your committee can find are the biological parents of some of the students who were abducted”, Lawan said.

The commissioner for education expressed happiness over the committee’s visit.

“He urged members of the Fact-finding Committee to convey to President Jonathan the people’s hope and belief that the girls would be found and reunited with their families”, the statement said.

Others who spoke at the meeting included Rev. Enoch Mark, whose two daughters are among the abducted girls.

“The Rev. Mark frowned at what he called the politicization of the abduction issue, pointing out that the matter was also not religious, because the families affected were adherents of the country’s major faiths”.