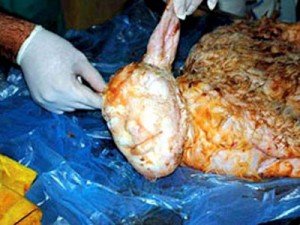 It seems end times are upon us, with so many bizarre occurrences, first it was a baby with the body of a goat, now it is a sheep with a humans face.

The photo above shows  a newly-born lamb with what looks like a human face.

Close-ups of the animal – which appears to be dead – reveal a full set of lips, a small nose and  a pronounced chin.

Stunned veterinary staff in a village near Izmir, Turkey, hold the creature’s face up to the camera.

The lamb’s face is so human-like that it could be a prop from a science fiction movie.

The animal was reportedly delivered by Caesarean section.

It is unclear exactly what caused the mutation although scientists are working on figuring this out, with some speculating that it could be due to an over-abundance of Vitamin A.

What do you think could have caused this?