Former Minister of Education, Oby Ezekwesili has condemned President Goodluck Jonathan on his comment over the #BringBackOurGirls campaign. 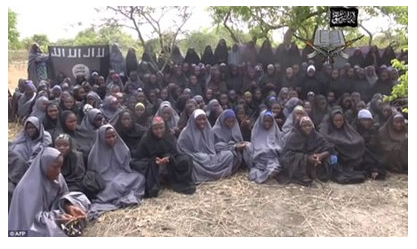 The former Vice President of the World Bank,  who led protesters to the presidential villa in Aso Rock, Abuja last Thursday, described the president’s response, made on his behalf by one of his Ministers, as insensitive.

It could be recalled that the protest planned to end at the presidential villa was blocked by security operatives, forcing the protesters to deliver a letter of protest they wanted to give Mr. Jonathan to a delegation made up of senior members of the government.

It was gathered that the Minister of State for the Federal Capital Territory, Olajumoke Akinjide told the campaigners that the president asked them to direct their protests to the Boko Haram sect.

While commenting on the matter via her Twitter account, Mrs Ezekwesili said the president’s response shows him as a man avoiding his responsibility as Nigeria’s leader.

She tweeted: “Regrettably, the response of our president’s delegation, delivered by Oloye Akinjide- Minister of state for FCT was underwhelming and inadequate.

“Should those insensitive and responsibility avoiding words be the message of our president, then I am afraid, Nigeria/Nigerians are in trouble.

“I choose to believe our president did not say those awful things that were read to us concerning citizens’ demand to #BringBackOurGirls.

“Facts are that regardless of afterthoughts that we are now being served by federal government, the institutional response to their fate was indifference.

“It was only after our social media campaign migrated to street marches- chibok women on 29thApril and #bringbackourgirls on 30th – that we saw motion.

“We are clear minded that the pressure we have mounted on the federal government to act is singularly in the interest of #chibokgirls, there’s no stopping.”

As at the time of compiling this report, the presidency is yet to respond to Mrs Ezekwesili’s statement.

It is worthy to note that more than a month after over 276 schoolgirls were abducted by the Boko Haram sect at the Government Girls Secondary School in Chibok, Borno State on 14 April, 2014, the girls are yet to regain freedom.