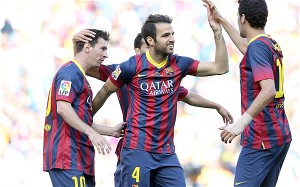 Sky Sports News understands that Cesc
Fabregas is set to leave Barcelona this
summer, with a return to the Premier League his preferred option.

Barcelona are willing to sell the Spain midfielder as he does not figure in their plans for next season.

It is understood that Fabregas has a £30million release clause written into his contract.

The 27-year-old is expected to interest a number of top Premier League teams, including his former club Arsenal.

Manchester United could be another destination following the attempts of executive vice-chairman Ed Woodward to sign him last summer.

Fabregas signed a five-year contract at Barcelona in 2011, the club from which Arsenal snared him as a 16-year-old, describing the move back home as the

“greatest challenge of his life”.

He scored nine goals in 48 appearances last term but the Catalan side endured a rare trophyless campaign.{SSN}