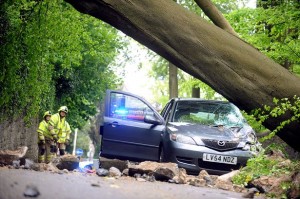 A family of four and their dog made a miraculous escape after a fallen tree smashed into their car.

The 60ft trunk was luckily stopped by a wall of Singleton Park in Swansea – preventing it from crashing completely through the vehicle’s roof and onto Emily and Piers Tumeth.

The couple and their daughters – Matilda, aged two, and seven-week-old Alice – walked away with just a few aches and pains following the incident on Saturday.

The tree fall reportedly brought down two others in the park, blocking the nearby Langland Terrace – the road remains closed.

Mrs Tumeth, 34, who was driving the Mazda, told the South Wales Evening Post: “The car stopped and we could smell petrol fumes coming from the engine, so we just wanted to get out as quickly as we could — it was only then that we saw the tree and realised what had happened.

“The tree brought the wall down onto the car, and the tree was left across the road resting on the wall on the opposite site — the wall stopped it crushing the car.

“We had a really lucky escape — I don’t want to think about what could have happened to us.”

South Wales Police said officers attended the Brynmill Lane tree fall at 2pm and there were no injuries reported.

A spokesman added that they were getting numerous calls about fallen trees.