A 42-year-old avid supporter, Ray Dunning, took ill during a match which saw his team relegated from the Championship. 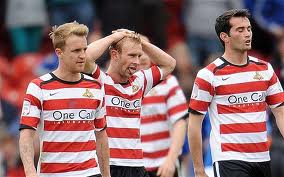 Dunning, was among the 2,000 away fans who had travelled to the Midlands for the end-of-season clash between Doncaster Rovers and champions Leicester City at the King Power stadium.

Report said Dunning took ill and collapsed as he watched his club (Doncaster Rovers) lose to Leicester City, adding that attempts were made to save his life in the stands before he was taken to hospital.

Meanwhile, the club has expressed its sympathies to the family of Dunning, saying;

Rovers in a statement said: “Doncaster Rovers would like to express our deepest sympathies and condolences to the family and friends of Ray Dunning, the Doncaster Rovers supporter who, it has been confirmed, died on Saturday.

“An avid follower over the years, Ray was taken ill whilst attending the Sky Bet Championship fixture between Leicester City and Doncaster Rovers at the King Power Stadium, Leicester, on May 3, 2014.

“The thoughts of everyone at the club are with his family, who have sent their thanks to the Doncaster Rovers fans for their efforts inside the stadium and the messages of support they have received” the statement reads.

The 1-0 loss to Leicester City conspired with other results to see Rovers relegated to League One.