Lagos State Governor, Babatunde Fashola, on Monday declared a seven-day mourning period in honour of a former governor of the state, the late Sir Michael Otedola, who died at 87, on Monday morning. 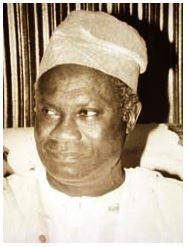 Fashola, while making the declaration in Ikeja, ordered that flags in all state government offices and institutions should fly at half mast during the period to honour the deceased.

He described Otedola’s death as a great loss to the state, adding that the former governor’s administration was characterised by great achievements.

“His indelible record of service is still there. The centre for excellence that we proudly proclaim today was his choice when he was invited among other governors to choose a sobriquet for Lagos” he said. “And that, and some other impactful projects he executed as governor are still visible and will remain evergreen in our memory”.

Fashola prayed to God to grant the deceased family the fortitude to bear the loss, as well as the peaceful repose of the his soul.