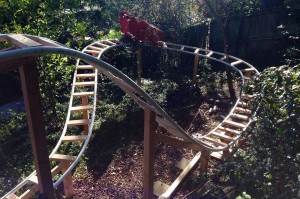 A father made his son’s dreams come true by building a 180ft long rollercoaster that stretches around their garden.

Will Pemble, 50, took six months to complete the mammoth DIY project after his son asked him to build the ride when they returned from a trip to a local theme park.

He threw himself into creating the impressive attraction and set up his own website, CoasterDad.com, to share his love of physics and showcase his incredible coaster.

With a little help from his 10-year-old boy Lyle, the committed dad scoured lumber yards for materials to build the ride, which ended up costing around $3,500 to finish.

He explained: “We were just back from one of many amusement park trips and Lyle asked a simple question, ‘Why don’t we build our own rollercoaster, Dad?’

“I couldn’t think of a single good reason to say no so Lyle and I headed off to the lumber yard for a few supplies.

“Today, our backyard rollercoaster is an unending source of excitement, challenge, education and connection. The coaster is complete and fully operational, although we keep adding onto it and making modifications.”

Now, he’s being inundated with requests by other children who can only dream of owning their own mini theme park just like Lyle and his 12-year-old sister Ellie’s.

And their E-commerce consultant dad hasn’t ruled out a change of career in the future.

He said: “People started asking if we did this kind of thing for a living and if we could go and build backyard rollercoasters for other families.

“If I’m honest, I can’t think of a single good reason to say no so that could well happen in the future.

“Our mission is purely to share our love of physics, family and fun so one thing has just led to another.

“The whole family has been involved in the project and the neighbours always check in to see how we’re doing.

“It’s amazing that all of this came from a kid asking one simple question and a dad saying yes.”

Share
Facebook
Twitter
WhatsApp
Previous articlePrince William Pictured Flying Economy To The UK From Friend’s Wedding in America
Next articleRussia Bans The F*** Word, Offenders To Pay Up To £41
- Advertisement -