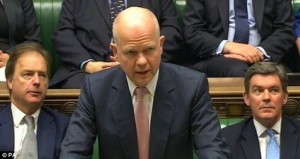 In a good new development, the Great Britain and America have finally decided to help in the search for 234 girls kidnapped from their school in Chibok Borno state on April 14.
British Foreign Minister William Hague confirmed that Britain would provide ‘practical help’ to secure the safe release of girls while the US Attorney General Eric Holder says the United States was sending FBI agents to trace the abducted school girls.
‘What has happened here… the actions of Boko Haram to use girls as the spoils of war, the spoils of terrorism, is disgusting. It is immoral,’ William said.
However, he said he did not want to discuss the details of what help Britain was offering.
The news that both the UK and U.S. will help in the search comes after a video was released of the head of Boko Haram, Abubakar Shekau where he claims responsibility for the abduction of the missing girls.
‘I abducted your girls. I will sell them in the market, by Allah,’ Shekau says in the video.