French news medium, Jeune Afrique has said that the Kidnapped Chibok girls have been seen in Troubled Central African Republic with armed men. 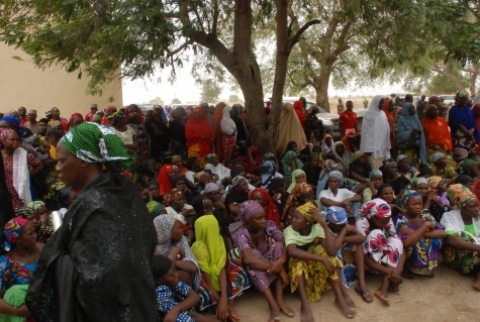 They said the girls where seen with Armed men in Birao, Birao is a small village in the north of CAR.

The French report was translated by Punch reporters and it states that: “The Nigerian schoolgirls abducted by Boko Haram have passed through the northern CAR, escorted by armed men. Based on several testimonies of inhabitants, the women arrived Wednesday, April 30 aboard trucks.

“They were guarded by heavily armed men, who spoke English, and also members of the former (CAR) rebel Seleka.”

Seleka is an Islamic rebel militia that took over the CAR government last year and has put their leader as President. The group has been carrying out several executions, rape and looting, making France send more troops to the troubled area.

The French paper continued: “According to our source, the convoy of two trucks and a pickup was previously seen at Tiroungoulou (about 170 kilometres southwest of Birao) and perhaps Chad.

“Upon arrival, some were frightened, cried and were violently rebuked in English. The girls and their guardians were then housed for several days in a house.

“The group reportedly left the scene on the night of Sunday to Monday, May 4 to 5, without a trace,” the report said.

Meanwhile the Cameroonian government has denied reports that most of the girls where married off in the country.

Cameroon’s Minister of Communication, Issa Tchiroma Bakari, said: “We insist that allegations from Nigeria that a part of the 200 young female students recently kidnapped in the North-East of Nigeria would have been transferred to Cameroon to be forced into marriage to members of the Boko Haram sect are fully unfounded.

“Cameroon will never ever serve as a support base for destabilisation activities towards other countries,” he said.