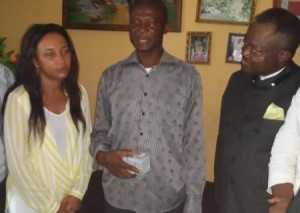 The President of the Federal Republic of Nigeria — Goodluck Jonathan saved a soul by donating the sum of N10m to ailing script writer, Chike Bryan to pay for his kidney operation.

Confirming the news, president of the Actors’ Guild of Nigeria, Ibinabo Fiberisima said that Bryan received the money on Monday, May 26, 2014 at his Ijegun residence in Lagos.

‘The money was given to us by the President (Goodluck Jonathan) to give him for his operations which should happen soon’ she told us.

Bryan, the current President of the Screen Writers Guild of Nigeria was reportedly battling with the sickness for over two years before it was recently diagnosed as a kidney disease.