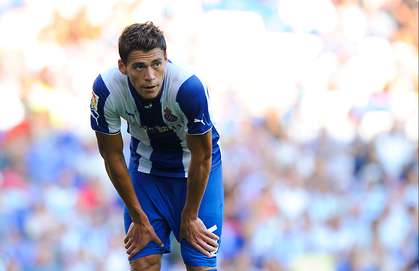 Mexican international Hector Moreno is open to a move to Manchester United to once again link-up with former boss Louis van Gaal, it has been claimed.

This is according to reports cited by The Daily Express, which claims that both the Red Devils and Serie A outfit Inter Milan are interested in signing the £8 million-rated Espanyol defender but his positive
relationship with Van Gaal – fostered during the pair’s spell in the Eredivisie with AZ Alkmaar – gives the Red Devils an advantage.

26-year-old Moreno – who is part of Miguel Herrera’s squad for the World Cup in Brazil this summer – has been in La Liga since 2011 but looks certain to leave Estadi Cornellà-El Prat in the near future with recent comments from the player’s agent having firmly highlighted his desire to seek pastures new.

A new centre-back will almost certainly be a priority for Manchester United and Van Gaal during the upcoming transfer market, particularly due to the fact that fans are having to bid farewell to the
experienced duo of Nemanja Vidic and Rio Ferdinand with their respective contracts at Old Trafford having reached their conclusions.

With 50 senior international caps and several years of top-flight football ahead of him, 26-year-old Moreno could be an ideal option for Manchester United.

Although a difficult 2013/14 campaign – that also saw Manchester United fail to qualify for the group stages of next season’s Champions League – has seen
the club’s reputation regress somewhat, Inter have also failed to really achieve sustained success over recent seasons and as such may not pose the same
threat in the market as the likes of other European heavyweights.

Van Gaal is notably loyal to his former players, of course, and it is certainly worth noting that AZ Alkmaar lifted the Dutch title during their time at AFAS Stadion back in 2009.

Manchester United fans, would you be content to see Moreno arrive this summer? Is he a big enough name
or are you expecting slightly more reputable recruits to arrive under Van Gaal’s leadership? Let us know your thoughts in the comment box provided below.{GMS}