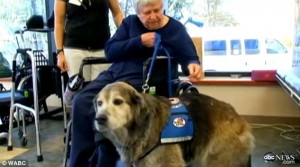 Move over, Lassie — there’s a new dog in town. And he knows how to use an iPhone.

Meet Major, a Labrador retriever pit bull mix, who spends his days with owner Terry McGlade, a U.S. Marine who suffers from PTSD and seizures after being wounded by an IED in Afghanistan. When McGlade had a seizure earlier this month, Major, a trained rescue dog, knew exactly what to do: He called for help. Not by whining or barking, but by pawing at McGlade’s iPhone.

“He was actually able to get my phone out of my pocket,” McGlade recalled to Ohio’s ABC6. “I don’t have the phone anymore because there are teeth marks on the phone.”

Major called 911 by repeatedly stepping on the phone’s screen for several seconds, alerting concerned dispatchers who eventually heard McGlade having a seizure in the background. In an interview with Fox & Friends, McGlade says the dog called 911 a total of 10 times. “[The dispatchers] kept hanging up because they thought it was a prank call,” he said.

With help finally on its way, Major waited in front of the house for medics to arrive, then led them to McGlade in the backyard. McGlade told Fox he didn’t think he’d be alive today were it not for the dog, adding:

Before I got [Major] I was actually in a really really dark spot. I was almost one of those suicide statistics. Just because the PTSD was that severe. The organization I received him from, Stiggy’s Dogs, actually rescued him from a hoarder situation, and … basically now he’s an extension of me. He’s brought my confidence back.

According to a Facebook post by McGlade’s mom, Debbie, Terry has recovered from the episode, but another seizure could happen again.