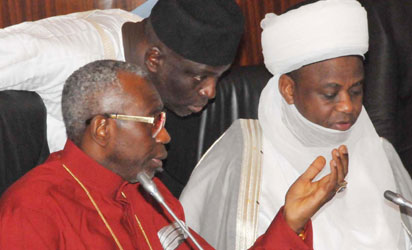 Prominent Islamic scholar, Sheik (Dr) Ahmad Gumi yesterday accused the Christian Association of Nigeria (CAN) and the Jama’atu Nasir Islam (JNI) of not doing enough to stem the persistent crises in the country.

“Let the good people of this nation, both Muslims and Christians who want to live in peace join hands to save the situation”, Gumi said in a statement posted on his Facebook wall.

“Muslims and Christians should reclaim their voices through the ballot boxes in free and fair elections. Let us elect good leaders to do our job and the speaking. Leaders we can challenge to measure up to their responsibilities. Let religious organisations stick to their mandate of teaching religious virtues and good mannerisms to all segments of the society or else they will continue to be the boot of the society”, Gumi warned.

He further said that “With all the atrocities being committed in this nation by the use of both illegal arms in the hands of terrorists or insurgents or the illegal use of legal arms through extra-judicial killings, mass punishment, embezzlement by corrupt officials and the near paralysis of the nation economically and security wise, the CAN like the JNI, never directly speaks out against the government and call them to order or resign.

According to the Islamic scholar, “The JNI was principally established by the Sardauna and Sheik Gumi to promote Islamic education of the borderless ignorance of Nigerian Muslims about the basics of Islamic knowledge, today after 50 years it cannot boast of even a mushroom university.

“The deviation or hijack needs no mention. That is why it lost its grip on the psyche of Muslims more especially the youths, pre-disposing them to fanaticism. CAN now and then makes a shout when the ‘envisaged’ interest of Christians appears to be affected without ever directly censoring the government. Likewise, the JNI or the self-appointed NSCIA”, Gumi said in the statement.