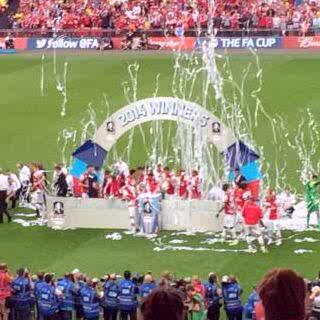 Football is an enigma. Just few weeks back, rivals alike were taunting Arsenal when Chelsea’s manager, Jose Mourinho, made a shocking comment to the Gunners boss, naming him a ‘’ specialist in failure ‘’.

In a strange twist of fate however, Chelsea ended the season trophyess, making it Mourinho’s second season without a trophy, for Arsenal? Well you know.

The road to the final for the boys from Northlondon was an arduous task. They had to battle with top teams like Liverpool, Tottenham, Everton and Wigan. And they excelled.

The pick of the bunch of their difficult task to the final was the crunch tie against Wigan; holders, who defeated Manchester City at the Ethiad to book a semi-final spot.

Wigan scored first after Per Merteshacker gave away an avoidable penalty.

At that point, the pressure was on Arsenal to show that fighting spirit that got them to the semis- They did.

Koscielny header left a stalemate at Fulltime. Extra time was a pulsating affair for both fans. On came penalties.

Fabianski did heroics between the sticks, Cazorla scored the winning goal to send his team to the final; it was a compulsory task that had to be completed.

With Arsenal being favorites, Steve Bruce’s team came into the game as underdogs, a mentality that worked as they scored two early goals through set piece situations.

The ghost of the 2011 Capital one Cup finals against Birmingham began to hunt Arsenal again. They created chances but couldn’t finish them. Frustrations began to mount, fans were stunned.

It didn’t take long before they got a freekick just outside the box. Unusually Cazorla stepped up, and BOOOOOM. It was a goal that ostensibly rejuvenated the team.

Hullcity’s tactics to sit back and defend their early two goal lead began to fade;

Arsenal capitalized on it but wasteful in the final third. Hullcity were ahead at Half time.

Second half was an entirely different encounter. With the onus on Arsenal to equalize, Steve Bruce side began a purported time wasting tactics.

The Gunners continued their first-half antics of missing top-notch opportunities.

But If the strikers won’t score, defenders are ready to help. We have seen that many times in football. Terry scoring blimey headers; Vidic rescuing a point; Skrtel bullet headers, this time, Koscienly equalized for the gunners hurting his ankle in the process. Not many Arsenal fans cared about his injury anyway, the goal was necessary to keep them in the game. Afterwards, the French defender played on in pains.

Second half didn’t produce a winner, same with the first extra time. Nerves began to kick in- Score or face the wrath of penalties for both sides.

But, on came the welsh Jesus. After Giroud brilliant orchestrated a cheeky back pass, Ramsey’s follow-up contact with the ball brought a third goal- A goal that was enough to secure an Fa Cup trophy for the Gunners after nine trophyless seasons.