Home Politics It Would Be A Security Risk For Jonathan To Visit North-East Now...
Facebook
Twitter
WhatsApp 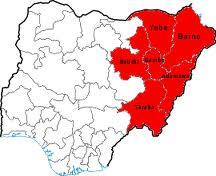 Northern Christian elders have risen to the defence of President Goodluck Jonathan in the face of public criticism over his purported cancellation of a trip to Chibok, Borno State, saying it is not advisable for him to visit the North-East now with the spate of Boko Haram insurgency in the region, describing the zone as dangerous.

The elders under the aegis of Northern States Christian Elders Forum (NOSCEF) said the president could direct rescue efforts for the over 200 pupils of Government Girls’ Secondary School, Chibok, Borno State, abducted by the Boko Haram sect on April 14, 2014, from the seat of power in Abuja without necessarily stepping foot in the region.

Recall that President Jonathan’s scheduled visit to Chibok on Friday one month after the schoolgirls were abducted was reportedly cancelled over security fears. The Presidency has since denied such a visit was in Jonathan’s plans as he was billed to jet out to Paris for a regional summit on security in Nigeria hosted by President Francois Hollande of France.

NOSCEF President, Olaiya Phillips, who spoke with our correspondent, said although the administration had made mistakes in the handling of the Boko Haram insurgency, what was important now was for Jonathan to lead his government to find and return the missing schoolgirls to their families unharmed.

He tasked government on the need to restore security to Adamawa, Borno and Yobe states and to update families of the abducted girls on the status of the search regularly until they are returned.

Phillips said, “Although, I think the families of the schoolgirls and the community of Chibok would have appreciated a visit from President Jonathan, they know he is personally handling the matter. I can understand that as head of government, it may have been a security risk for him to visit the North-East.

“I think the families and community of Chibok could understand that, if they knew the President stayed in Abuja to lead the government to quickly resolve the situation.

“The fact that a visit of the Head of State to Borno State would be a security risk is evidence enough that the situation there is clearly not under control”.

According to Phillips, some local leaders in the region felt that the security situation had improved under emergency rule, due to the drop in the number of incidents in urban areas where large numbers of troops have been stationed.

He, however, said it would be unfortunate if they could not appreciate how the murder and abduction of innocent people and destruction of property in the more rural areas of their constituencies still warranted the imposition of the state of emergency.

“Although the incident in Chibok is drawing the most attention at the moment, attacks have occurred in Adamawa, Yobe and Borno states this year, including the murder of 59 children in Buni Yadi only a few months ago.

“It may be that as the terrorists seem to focus on attacking rural Christian communities that this is not a priority for some local leaders 18 months before elections. But, that will offer little comfort to my members in these areas who tell us that they are terrified when they put their children to bed every evening because they don’t know where Boko Haram will appear next”, the NOSCEF president said.

Phillips, therefore, implored North-East leaders to use whatever means necessary to restore security in their states.