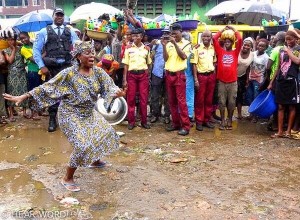 Veteran Nollywood actresses entertain the public when they took to the streets of Mushin market on Wednesday 14th May 2014.

The actresses have an upcoming stage play – Hear Word scheduled to kick off on the 23rd May 2014 at MUSON Centre, Onikan, Lagos.

To promote the production, they were spotted performing in the rain, while passersby looked on.

Check out photos below: –