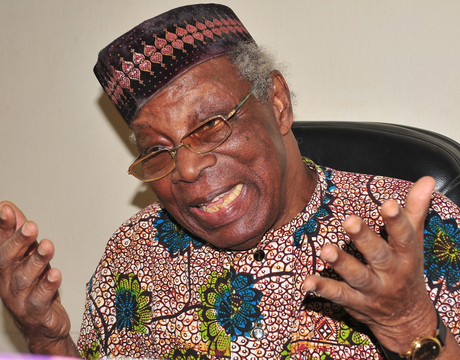 President Goodluck Jonathan on Monday said he received, with a deep feeling of immense national loss, the death of a retired Supreme Court Justice, Chukwudifu Oputa.

In a statement by his Special Adviser on Media and Publicity, Dr. Reuben Abati, the president extended condolences to the eminent jurist’s family, relatives, associates and friends on behalf of himself and the Federal Government.

Jonathan urged them to be comforted by the knowledge that the deceased lived a long and fulfilled life.

The statement read, “On behalf of himself, the Federal Government and people of the Federal Republic of Nigeria, the President extends sincere condolences to the eminent jurist’s family, relatives, associates and friends.

“As they mourn the passage of the retired Justice of the Supreme Court who will always be remembered, amongst other career highlights, for his celebrated chairmanship of Nigeria’s Human Rights Violations Investigation Commission 14 years ago, President Jonathan urges them to be comforted by the knowledge that Justice Oputa lived a long, very fulfilled and achievement-laden life.

“The President believes that Justice Oputa will always be honoured now and in posterity for having served the nation as a most distinguished and courageous jurist who made very significant and indelible contributions to the advancement of Nigerian jurisprudence.

“President Jonathan is confident that although Justice Oputa has now left the world of the living, the late jurist will be long remembered for his spirited legal activism and will continue to serve as a splendid role model for present and future generations of Nigerian judges.

“He prays that God Almighty will receive Justice Oputa’s soul and grant him a well-deserved rest from his diligent and exemplary labours on earth”.

It would be recalled that Justice Oputa, who had struggled with failing health for several months, which culminated in a stroke earlier this year, died on Sunday afternoon in Abuja.