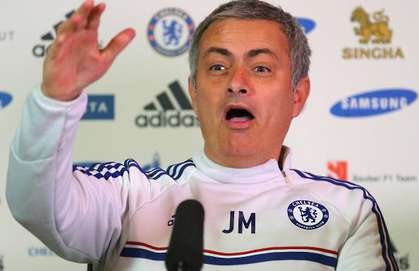 The football world was in a synchronised
celebration on Sunday morning as Arsene Wenger ended a barren spell to collect his first major trophy as Arsenal manager in almost nine years.

Wenger has taken the brunt of heavy criticism since 2005 – Arsenal’s last trophy win – despite keeping the Gunners competitive through a difficult transition to the Emirates Stadium.

However, one peer is seemingly still unimpressed with Wenger’s achievements in north London – no
prizes for guessing who.

Chelsea manager Jose Mourinho, who so infamously described the Arsenal boss as a ‘Specialist in failure’ earlier this season, has responded to calls for him to
retract his statement.

Mourinho finished his first season of his second spell at Chelsea without a trophy, giving Arsenal fans the perfect opportunity to rename the Special One as the “Specialist in failure’.

Unsurprisingly, Mourinho doesn’t see it that way, responding in typical sarcastic fashion when asked about Arsenal 3-2 win over Hull City.

Quoted in the Daily Express, he said: “No. In the last nine years, Arsenal won an FA Cup. That is nice for them.”

The Gunners will now look to strengthen their position by spending big in the summer transfer market, while Mourinho is also looking to overhaul his Chelsea squad.

Needless to say, Wenger and Mourinho’s rivalry will be hitting new levels in the Premier League next season.{GMS}