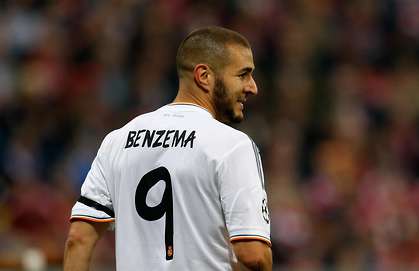 Karim Benzema is closing in on a new long- term contract with Real Madrid, which will end speculation regarding his future, reports Le 10 Sport.

The French newspaper, which relays information from France Football, suggests that Real Madrid’s potential pursuits of Sergio Aguero and Luis Suarez has no bearing on Benzema’s future at the Bernabeu.

That contradicts the widely-held opinion that a successful bid for either the Manchester City or Liverpool strikers would spell the end of Benzema’s Real Madrid career.

It seems Arsenal were relying on such a fact, as Arsene Wenger reportedly placed Karim Benzema on the top of his striker wish list this summer.

Arsenal are in dire need of reinforcements up front as they look to improve on their perennial fourth placed
finishes in the Premier League.

Around £40m was reported to be enough to convince Real Madrid into a sale, which seemed rather steep considering the Frenchman has just a year remaining
on his current contract.

Manchester United have also been linked with a move for Benzema as Louis van Gaal aims to put the Red Devils amongst the Premier League elite at the first time of asking. But it is Arsenal who have held a long-term interest and would be left most devastated by losing out.

However, it looks like that is set to change with both Benzema and Real Madrid in talks to extend his current contract to keep him in the Spanish capital for the foreseeable future.

Although there is still a big gap between the two parties in terms of wages and length of contract, early signs are that both are keen to agree a new deal, leaving Arsenal and Manchester United
potentially looking towards other targets.{GMS}