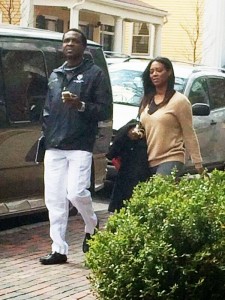 At first, when Kenya Moore revealed that she would be storming the ‘The Real Housewives of Atlanta’ show with her African Prince, the whole world thought she was referring to D’banj.
However, it seems the reality star was talking about someone else.
Kenya Moore was recently photographed with Nigerian billionaire Tonye Cole which has left a lot of people guessing if he is the African Prince she has been boasting about.
Moore and Cole were photographed at Harvard University by a fan whose twitter name is ‏@LudaKrys1. Luda posted the picture online with the caption: –
‘Just seen Kenya Moore from RHOA in Harvard square w/ her mystery man. He’s an old man!! She caught me taking pics lol’
Meanwhile Kenya herself also wrote on her twitter page the same day confirming she was indeed at Harvard.