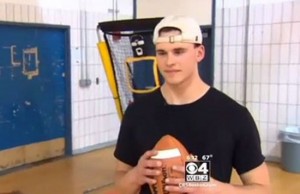 17-year-old Aaron Golub from Newton, Massachusetts, is legally blind. His right eye does not function at all, and he has very little vision in his left. But what he lacks in vision, the boy makes up with sheer determination. He recently achieved his lifelong dream – a chance to play football at university.

Getting a spot on a college football team is no joke, a lot of kids with perfect vision can’t make it. But Aaron, a senior at Newton High School, has gone and done it despite all the odds against him. Through sheer hard work, he’s managed to secure a preferred walk-on spot at Tulane University, one of the top college football teams in the United States. He has been signed on as a long snapper, a position that requires tremendous speed and accuracy.

While most people believe you need natural talent to be good at sports like football, Aaron was quite mediocre when he first started to play. According to his coach Chris Rubio, “He was very, very, very, we’ll say ‘average at best’ when he started. But the kid is just so determined. You tell him what to do, and consider it done.” For several years, Aaron relentlessly practiced snapping a ball into a target every morning before school and on weekends.

Today, he is one of the premier long snapper recruits in the US. According to various sports ratings, he ranks at no. 12 among the nation’s long snappers and at no. 19 among all the players in Massachusetts. He’s been long snapping for two years on his high school football team and Rubio says that he’s just had one bad snap during this time. According to Aaron, it’s sheer passion that’s gotten him this far.

“I love everything about it, just the whole game,” he said. “It’s fun to play, to watch and certainly to be a part of. He started playing in the seventh grade, a decision that had his parents and the school coaches quite concerned. But after some discussion, they decided to support Aaron, no matter what. It took a while, but by the time he got to his sophomore year of high school, he got really good. That’s when he started long snapping. And he also realized that he could probably carry on his football dreams beyond high school.

“I knew that if I wanted to play in college, I wouldn’t be able to do what I was before,” said Aaron. “Not many people get the opportunity to continue playing the game.” Of course, a football field is a dangerous place to be even with perfect vision, but as a long snapper, Aaron has performed spectacularly well. When asked how he does it, he said: “It’s difficult, you have to learn to adjust to different things on the field.”

If you’re unfamiliar with long snapping, I suggest you watch a few videos to understand exactly how tough it is. The snap needs to be delivered to the punter from up to 15 yards away, requiring a high level of skill and precision. Snappers need to deliver each and every time, and they do this by memorizing the movements necessary to complete the action. It is actually quite hard to find a good long snapper who performs consistently. And a blind one? Talk about making the impossible possible!

Coach Rubio, who specializes in teaching long snapping, has played a crucial role in Aaron’s success. He has a lot to say in the young player’s favor. Rubio regularly blogs about his experiences in working with Aaron, and is amazed at the amount of transformation he has been through. “He was adamant about learning the process,” said the coach. “He was in constant contact with me, asking what to do and how to fix this and that. It is absolutely amazing how far he has come.”

Aaron has gone through several camps and countless repetitions. Despite initial failures, he’s always been eager to try again. “He’s a true student of long snapping and an inspiration to all,” said Rubio. “Those with or without sight can learn from this young man.” On a typical day, Aaron gets to school by 6 am and practices for at least an hour. Then he attends classes, and heads to the gym after school where he lifts weights to add to his 6 foot 2 inch, 195-pound frame.

Despite his success on the field, Aaron says that education is as important to him as football. “I’m going to school to be a student, not to be an athlete. I wanted to find a school that I’d be happy with regardless of what happens with football,” he said. And with Tulane, he has found everything he wanted and more. All he wants to do now is go to school, get an education and play football. “There’s nothing that you can’t accomplish if you really want to do it,” he said. True, that!