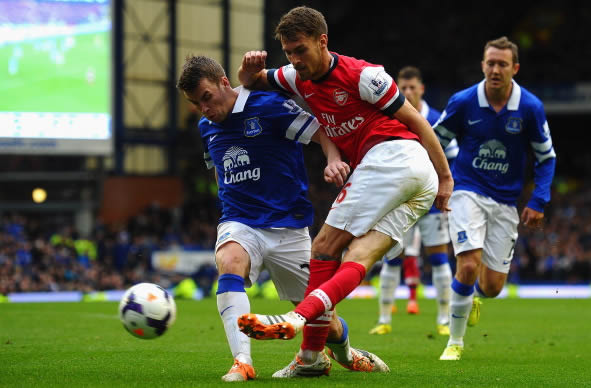 Jens Lehmann believes Aaron Ramsey must stay fit for a whole Premier League campaign before he can lay claim to the tag ‘world class’ but admits the Welsh midfielder was fantastic when called upon last term.

Never one to mince his words, the ‘Invincible’ spoke of the importance of being consistently fit as a fundamental factor in reaching and maintaining peak
performance.

Reflecting on the 22-year-old’s exploits, which included a four month stint on the sidelines with a thigh problem, the retired keeper told BBC Radio Wales:

“Ramsey was a surprisingly fantastic server of the club because when you’ve looked at the seasons before, he was good, but not that outstanding.

“And all of a sudden he knew how to score; he found the goal quite often. Unfortunately – and that’s what he has to work a lot on – he got injured again.

“And when you want to become a world class player, the first thing is that you’re always available. But when you’re not always available you can be as good as you want, but you will lose your rhythm and, slightly, your physique.

“And that’s what Arsenal can’t have with Aaron because Aaron was such a great character and talent that he has to be available all the time.”

In total Ramsey scored 16 goals in 34 appearances over the course of last season but his absence between Boxing Day and the defeat to Everton in early April certainly took its toll on a Gunners squad depleted at the time by injuries to other parties.

Given his horrific leg break in 2010, the series of niggly injuries which followed and the psychological rollercoaster that resulted from the fitness issues and other off-field issues it’s amazing how far Ramsey has come in the last 18 months. But maybe Jens is right…

Without any international football to
distract him this summer (and that likely to be an on-going state of affairs basis given Wales’ history) he, unlike some of
his teammates, has a real chance to hit the ground running next year. Let’s hope that a full pre-season stands him in good stead come August.{Arseblognews}